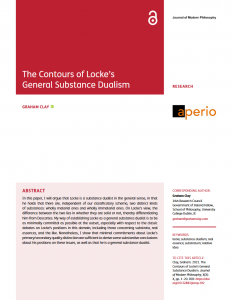 In this paper, I will argue that Locke is a substance dualist in the general sense, in that he holds that there are, independent of our classificatory schema, two distinct kinds of substances: wholly material ones and wholly immaterial ones. On Locke’s view, the difference between the two lies in whether they are solid or not, thereby differentiating him from Descartes. My way of establishing Locke as a general substance dualist is to be as minimally committal as possible at the outset, especially with respect to the classic debates on Locke’s positions in this domain, including those concerning substrata, real essences, and the like. Nonetheless, I show that minimal commitments about Locke’s primary/secondary quality distinction are sufficient to derive some substantive conclusions about his positions on these issues, as well as that he is a general substance dualist. 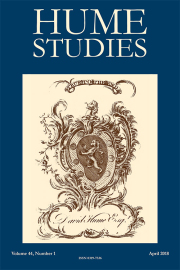 Commentators have rightly focused on the reasons why Hume maintains that the conclusions of skeptical arguments cannot be believed, as well as on the role these arguments play in Hume’s justification of his account of the mind. Nevertheless, Hume’s interpreters should take more seriously the question of whether Hume holds that these arguments are demonstrations. Only if the arguments are demonstrations do they have the requisite status to prove Hume’s point—and justify his confidence—about the nature of the mind’s belief-generating faculties. In this paper, I treat Hume’s argument against the primary/secondary quality distinction as my case study, and I argue that it is intended by Hume to be a demonstration of a special variety. 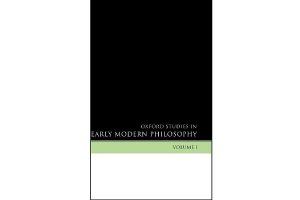 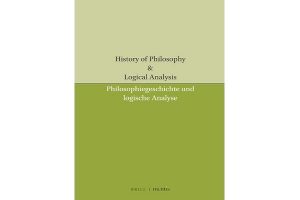 We argue that prevailing definitions of Berkeley’s idealism fail to rule out a nearby Spinozist rival view that we call ‘mind-body identity panpsychism.’ Since Berkeley certainly does not agree with Spinoza on this issue, we call for more care in defining Berkeley’s view. After we propose our own definition of Berkeley’s idealism, we survey two Berkeleyan strategies to block the mind-body identity panpsychist and establish his idealism. We argue that Berkeley should follow Leibniz and further develop his account of the mind’s unity. Unity—not activity—is the best way for Berkeley to establish his view at the expense of his panpsychist competitors. 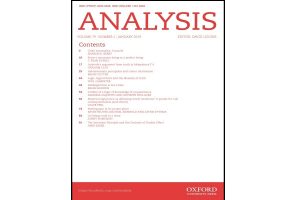 Some of Aristotle’s statements about the indemonstrability of the Principle of Non-Contradiction (PNC) in Metaphysics Γ 4 merit more attention. The consensus seems to be that Aristotle provides two arguments against the demonstrability of the PNC, with one located in Γ 3 and the other found in the first paragraph of Γ 4. In this article, I argue that Aristotle also relies upon a third argument for the same conclusion: the argument from truth. Although Aristotle does not explicitly state this argument, it is the best argument that he could use to defend some of his statements in the second paragraph of Γ 4. Since the argument relies on only a few of Aristotle’s core views about truth, I propose that it is faithful to his considered position throughout his corpus, and it may be the strongest argument he could offer for the indemonstrability of the PNC. 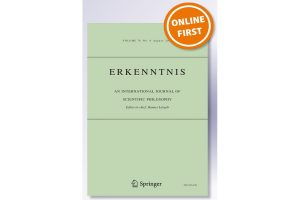 There are some necessary conditions on causal relations that seem to be so trivial that they do not merit further inquiry. Many philosophers assume that the requirement that there could be no temporal gaps between causes and their effects is such a condition. Bertrand Russell disagrees. In this paper, an in-depth discussion of Russell’s argument against this necessary condition is the centerpiece of an analysis of what is at stake when one accepts or denies that there can be temporal gaps between causes and effects. It is argued that whether one accepts or denies this condition, one is implicated in taking on substantial and wide-ranging philosophical positions. Therefore, it is not a trivial necessary condition of causal relations and it merits further inquiry.